Portrait of an Old Man 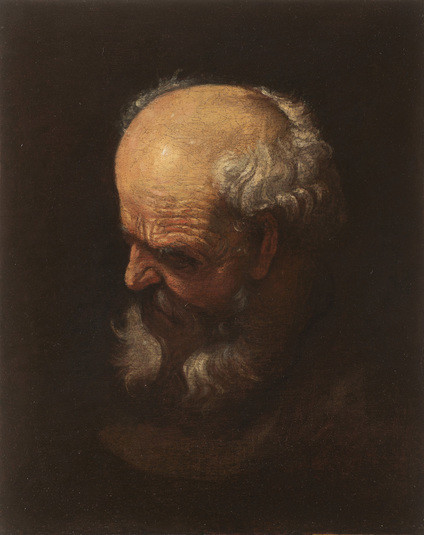 Luca Giordano, a native of Naples, was born into the family of painter Antonio Giordano. He received his basic art education from Giuseppe de Ribera and then probably went to the studio of Pietro da Cortona. Thanks to the speed with which he painted, he earned the nickname Luca Fa Presto. Giordano is considered one of the most important artists of his time with over five thousand paintings attributed to him. In addition to his teachers, he was also influenced by Rubens and Van Dyck, and later Titian and Veronese. He worked in Venice, Florence, but also in the court of Spanish King Charles II. His paintings stand out for their airy compositions, precise use of color, a great deal of expressivity, yet with a fine polished style. This portrait of a man is depicted using atypical, but masterfully conceived perspective. The man emerges from a simple dark background. He has a receding hairline, a pale gray beard, and distinctive, yet naturally executed wrinkles. The light falls directly on the old man's head and lets the wisdom and serenity of old age come to the forefront of the painting. (expert opinion: Alessandro Delpriori, PhD, Università di Firenze)
Share:
Subscribe to our Newsletter